SANTA CRUZ ISLAND, California, Sept. 2, 2019 (Gephardt Daily) — As many as 34 people are reported missing and feared dead following a boat fire off the coast of California early Monday morning.

Multiple news outlets, citing unnamed officials from the Ventura County Fire Department, say the reported victims were aboard a 75 foot vessel near Santa Cruz Island when the fire broke out.

The U.S. Coast Guard confirmed via Twitter they have “launched multiple rescue assets along with assets from local agencies to assist more than 30 people in distress on a 75 foot boat near Santa Cruz Island.”

In a follow up Tweet, the Coast Guard said, “a group of crew members has been rescued (one with minor injuries) and efforts continue to evacuate the remaining passengers.”

The USCG made no other mention of casualties.

KTLA and FOX News in Los Angeles, citing unnamed sources with the Ventura County Fire Department, reported as many as 34 people died in the early morning blaze, which is believed to have broken out aboard a diving vessel about 3:30 a.m.

Gephardt Daily is monitoring the story and will provide updates as more information becomes available. 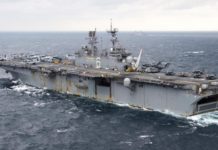