May 23 (UPI) — The British government raised its terror threat alert to its highest level on Tuesday, following the deadly attack on an Ariana Grande concert in Manchester.

British Prime Minister Theresa May announced the heightened alert — from “severe” to “critical” — which indicates that another terrorist attack could be imminent.

“It is a possibility we cannot ignore, that there is a wider group of individuals linked to this attack,” she said.

“It is now concluded on the basis of today’s investigations that the threat level should be increased for the time being from severe to critical. This means that their assessment is not only that an attack remains highly likely but that a further attack may be imminent.”

“Critical” is the top level of Britain’s terror threat system.

Earlier Tuesday, the Islamic State claimed responsibility for the bombing that killed 22 people and injured 59. Officials said several school-age children were among them.

British police identified the suspected attacker Tuesday as Salman Abedi, a 22-year-old British citizen of Libyan descent, a European intelligence official said. Abedi’s brother was also taken into custody. It wasn’t immediately clear, though, if the attacker was directly or indirectly supported by the militant Islamist group.

The Greater Manchester Police said officers have arrested a 23-year-old man in South Manchester, but it wasn’t immediately known if that person was Abedi’s brother.

Authorities were still trying to determine how the attack was carried out and whether there were other accomplices.

The Islamic State’s claim of responsibility, though, is being met with skepticism.

“We have not verified yet the connection,” U.S. National Intelligence Director Dan Coats said Tuesday. “They claim responsibility for virtually every attack.”

The first two confirmed victims were 18-year-old student Georgina Callander and 8-year-old Saffie Rose Roussos. The identities of other victims have not yet been revealed, but David Ratcliffe, medical director of North West Ambulance Service, said at least a dozen children under the age of 16 are among the injured.

Panicked spectators fled the arena after what several concertgoers described as a huge explosion after Grande’s last song. British police said the IED was a “home-made” device.

“Broken. From the bottom of my heart, I am so so sorry,” Grande wrote on her Twitter page late Monday. “I don’t have words.”

May called the strike a “callous terrorist attack” that targeted children.

Speaking in front of 10 Downing Street Tuesday, she said a “single terrorist” detonated the explosive device near an arena exit at about 10:30 p.m. Monday, just after the concert had ended. She said the attacker chose the time and place “to cause maximum carnage and to kill and injure indiscriminately.”

“It is now beyond doubt that the people of Manchester and of this country have fallen victim to a callous terrorist attack. An attack that targeted some of the youngest people in our society with cold calculation,” she said in a statement. “This was among the worst terrorist incidents we have ever experienced in the United Kingdom, and although it is not the first time Manchester has suffered in this way, it is the worst attack the city has experienced, and the worst ever to hit the north of England.”

May said the attacker, believed to be Abedi, died in the bombing. Many of the injured have life-threatening conditions, she added.

“The whole nation has been shocked by the death and injury in Manchester last night of so many people, adults and children, who had just been enjoying a concert,” Queen Elizabeth II said in a statement, calling the attack an “act of barbarity.”

The arena, built in 1995, has a capacity of 21,000 spectators but it is not yet clear how many people attended the show.

May chaired a meeting of the British government’s emergency committee prior to making her statement and is expected to visit Manchester later Tuesday.

“All acts of terrorism are cowardly attacks on innocent people, but this attack stands out for its appalling, sickening cowardice — deliberately targeting innocent, defenseless children and young people, who should have been enjoying one of the most memorable nights of their lives,” she said.

Greater Manchester Mayor Andy Burnham said the city will hold a vigil at Albert Square at 6 p.m. Tuesday for the victims.

“We will never be beaten,” he said.

The Manchester Arena bombing is the worst attack in Britain since the July 7, 2015, bombings in which 52 people were killed. That attack targeted public transportation.

Out of respect for the victims, May and opposition leader Jeremy Corbyn agreed to suspend campaigning for Britain’s June 8 general election until further notice.

The Vatican said Pope Francis is “deeply saddened” by the bombing.

“His Holiness Pope Francis was deeply saddened to learn of the injury and tragic loss of life caused by the barbaric attack in Manchester,” the Vatican wrote in a statement. “He expresses his heartfelt solidarity with all those affected by this senseless act of violence. He commends the generous efforts of the emergency and security personnel, and offers the assurance of his prayers for the injured, and for all who have died.”

On Tuesday, the Arndale shopping center near the Manchester Arena was evacuated after an explosion was reported there, though police said it is not related to the concert attack. 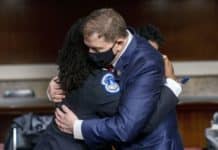