Sept. 15 (UPI) — British lawmaker Jo Swinson made history by becoming the first person to take a baby into a session of Parliament.

Swinson took the child with her to London’s House of Commons for a legislative debate Thursday, deciding she didn’t want to hand him over to someone else for such a short period of time.

“The options were: wake him up and hand him to somebody else for 20 minutes, or go in and sit down, do no harm, and he stayed asleep for most of it,” she said.

Swinson said she hopes the gesture will modernize Britain’s legislature.

A Liberal Democrat Party member, she left the hearing earlier to feed the 11-week-old child. She returned with the boy in a baby carrier. The baby, Gabriel, slept through the entire legislative proceeding.

“The convention is that you come back at the end of the debate to listen to the final speeches,” Swinson said later. “By that time I’d had to leave the chamber, I’d had to go and feed my baby and he had then fallen asleep on me in the baby carrier.”

“I think it’s a step forward for modernizing parliament and for sending a message that it really needs to be possible for parents to be able to combine their responsibilities for their children with their working lives, and all too often that is made too difficult,” Swinson said. “That won’t always mean taking your child to work.” 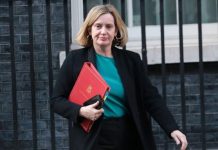 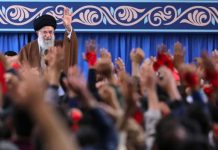 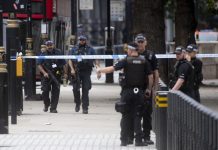