Sept. 5 (UPI) — The British Parliament on Wednesday approved a bill preventing Britain from leaving the European Union without a bloc-approved deal.

Members of parliament, bolstered by the opposition and Tory rebels, approved the bill 327-299.

Earlier in the day, British Prime Minister Boris Johnson swore in the House of Commons he would support holding a new election in October if lawmakers passed the bill.

Tuesday, the House of Commons voted to wrest control of the legislative agenda from Johnson, who lost the majority in Parliament after a Conservative Party member defected. In all, 21 Conservative lawmakers were booted out of the party by Johnson.

Johnson said he will call for a snap election Oct. 15 if the bill succeeds. Britain’s departure would be delayed to January if Johnson can’t reach trade and border agreements by the Oct. 31 deadline.

The European Council will hold a summit on Oct. 17, where Johnson said he hopes to “get Brexit done.”

In a speech to Parliament last week, Johnson blamed Labor Party leader Jeremy Corbyn for inciting protests while advocating for a “surrender bill” to “wreck any chance of the talks and we don’t know his strategy at all.”

Johnson challenged Corbyn to an election, calling him a “chlorinated chicken.”

“I really don’t see how, with a straight face, the right honorable gentleman can accuse anybody of being unwilling to stand up to scrutiny when he will not agree to submit his surrender bill to the verdict of the people in an election,” Johnson said. “He’s frightened.”

Corybn responded by accusing Johnson of not having a real exit strategy and not telling the public the true impact of what would happen if Britain crashes out of the EU.

“He’s been prime minister for six weeks and he promised to get Brexit sorted,” Corbyn told the House of Commons. “In six weeks he’s presented nothing to change the previous prime minister’s deal, which he twice voted against. These negotiations that he’s talking about are a sham. All he’s doing is running down the clock.” 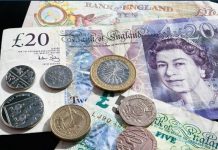