July 7 (UPI) — After months of scandal and calls for his resignation, British Prime Minister Boris Johhnson agreed to step down Thursday after a wave of departures involving his closest allies and Cabinet members.

The move was fueled by Johnson’s involvement in the scandal known as “partygate” — revelations that he and other government officials held social gatherings during the height of the COVID-19 pandemic when Britons were essentially locked down and barred from doing the same.

Johnson announced Thursday that he would step down as prime minister — but would remain in the post until a successor is chosen. Growing discontent in parliament, however, may challenge that plan.

Johnson acknowledged in his remarks that the search for the next leader is beginning immediately.

“It is clearly now the will of the parliamentary Conservative Party that there should be a new leader of that party and therefore a new prime minister,” he said in his announcement.

“I agreed with Sir Graham Brady, the chairman of our backbench MPs, that the process of choosing a new leader should begin now,” he added. “And the timetable will be announced next week.”

“I have today appointed a Cabinet to serve — as I will — until a new leader is in place.”

“In politics, no one is remotely indispensable,” he added. “To that new leader — whoever he or she may be — I say I will give you as much support as I can.”

Johnson expressed sadness over leaving and thanked Britons for their support over the last four years.

“I know that there will be many people who are relieved and perhaps quite a few will also be disappointed, and I want you to know how sad I am to be giving up the best job in the world.”

Calls for Johnson’s resignation have persisted for many months, but the prime minister had steadfastly refused to leave the post. After several resignations in the past couple of days, including treasury minister and close ally Nadhim Zahawi, Johnson finally agreed to do so. Zahawi reportedly told Johnson that he was no longer able to lead effectively under the weight of scandal.

Word of Johnson’s resignation came after he met with the chairman of the Conservative Party’s 1922 Committee.

Initially, Johnson agreed to resign as leader of the Conservative Party and remain prime minister until the fall — but other British political leaders and allies informed him that plan would not be sustainable and only delay the turmoil.

“I want to say to the millions of people who voted for us in 2019, many of them voted Conservative, for the first time. Thank you for that incredible mandate,” Johnson said in his announcement Thursday. “The biggest Conservative majority since 1987.”

Johnson’s resignation on Thursday marked a dramatic shift from Wednesday, when he again refused to resign and argued that he still had a mandate from voters to lead the British government.

The prime minister vowed to “keep going” during a heated session in the House of Commons on Wednesday after lawmaker and fellow Conservative Bernard Jenkin suggested that Johnson call for a new general election.

“What we need is a stable government, loving each other as Conservatives, getting on with our priorities,” Johnson had said.

Later Wednesday, a delegation of Cabinet members visited Johnson at No. 10 Downing Street and urged him to resign. Sajid Javid, secretary of state for health and social care, and Rishi Sunak, chancellor of the exchequer — two of Johnson’s top Cabinet officials — resigned Tuesday night.

Whoever succeeds Johnson as Conservative Party leader, which holds the majority in British Parliament, will automatically become prime minister.

A damaging report was issued in May that slammed Johnson and others for holding the social parties in 2020 and 2021 while Britain was under COVID-19 restrictions. The 60-page report was compiled by civil servant Sue Gray and condemned Johnson and the others for throwing the parties while the restrictions barred the rest of the country from such social gatherings.

The wave of Cabinet resignations came immediately after Johnson’s office acknowledged another scandal on Tuesday — that the prime minister knew of inappropriate behavior involving former Deputy Chief Whip Chris Pincher in 2019, but appointed him to the position in February anyway. Johnson initially denied that he knew about the accusations.

That revelation ultimately led to the departure of more than 50 Cabinet ministers, who opted to leave government as opposed to remaining to serve under Johnson’s leadership.

Johnson, who succeeded Theresa May as prime minister in 2019, survived a no-confidence vote last month related to the “partygate” scandal. Johnson argued that he didn’t realize that he and the other government workers were breaking COVID-19 restrictions.

Britain’s Labor Party, which has been out of power for more than a decade, sought to take advantage of the political crisis by calling for a complete overhaul of the British leadership — not just at the top of the Conservative Party.

“We don’t need to change the Tory at the top. We need a proper change of government. We need a fresh start for Britain.” 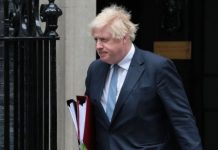