Earning a record five MVP awards and a second Super Bowl this year, Manning informed General Manager John Elway and coach Gary Kubiak of his decision, the Denver Post reported. He is expected to make the announcement public Monday.

This announcement came as no surprise. Manning, 39, had a tough 2015, with some saying he looked old and too weak with right arm and left foot problems. He retires as the only quarterback in league history to lead two franchises to Super Bowl titles.

Manning led the Broncos to their third Super Bowl title as an important member of the NFL’s No. 1 defense. The season reached a crescendo with a 24-10 win over theCarolina Panthers in Super Bowl 50.

“When you look at everything Peyton has accomplished as a player and person, it’s easy to see how fortunate we’ve been to have him on our team,” Elway said in a USA Today report.

“Peyton was everything that we thought he was and even more — not only for the football team, but in the community. I’m very thankful Peyton chose to play for the Denver Broncos, and I congratulate him on his Hall of Fame career,” Elway said.

The quarterback’s legacy was built in Indianapolis after the Colts chose him as their No. 1 pick in the 1998 draft. He earned four MVP awards while playing with the Colts and started two Super Bowls for them, then was named MVP of Super Bowl XLI after the Colts beat the Chicago Bears.

Manning has remained quiet since this year’s Super Bowl win, as renewed scrutiny of an alleged 1996 incident with a school trainer at the University of Tennessee, then allegations he used a banned substance, HGH, continue to circulate. Manning denies any wrong doing.

A series of surgeries on his neck and a spinal fusion in 2011 led the Colts to release Manning. He arrived in Denver in 2012. While with the Broncos Manning set single-season records for 55 touchdowns and 5,477 passing yards in 2013.

He retires the all-time leader with 539 regular-season touchdown passes and 71,940 yards. He and Brett Favre tied for the most regular-season wins as starting quarterbacks at 186, but Manning racked up 200 including playoffs. 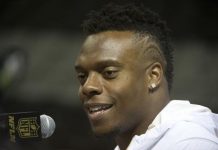 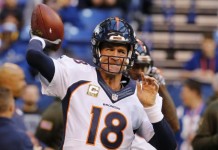 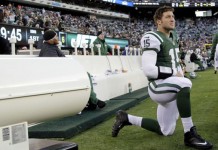