NEW YORK, Nov. 22 (UPI) — Federal officials arrested a Brooklyn cab driver Monday on charges he tried to join the Islamic State and was contemplating an attack on Times Square.

Mohamed Rafik Naji was charged in federal court Monday with allegedly attempting to provide material support and resources to a terrorist group, based on Facebook posts for the last two years in support of the Islamic State, a trip to Yemen authorities say was to join the militant group and conversations with informants about attacking people in New York.

While law enforcement officials say it does not appear Naji was actively planning an attack, the support he has expressed for the Islamic State, also known as ISIS, ISIL and Daesh, combined with his conversations about potential attacks motivated his arrest this week.

Naji had expressed interest in an attack similar to the one on Bastille Day this year in Nice, France, when a terrorist drove a truck into a crowd, killing 86 and injuring hundreds of others. The New York Police Department and federal officials are on high alert with Thanksgiving coming and the Islamic State’s recent encouragement of attacks similar to the one on Bastille Day.

“The arrest of Mohamed Rafik Naji on charges he provided material support to ISIL is a sharp reminder of the evolving threat of global terrorism,” New York Gov. Andrew Cuomo said Monday. “New York must remain vigilant in the face of hate and intolerance, and continue to advance the core values of democracy that this state and nation were founded upon. While we do not have any specific threat at this time, public safety is paramount, and we will continue to work aggressively with all local and federal partners.”

According to an indictment unsealed Monday, Naji started posting messages on Facebook in support of the Islamic State in 2014, shortly thereafter planning a trip to Yemen to attempt to join the group.

The filing included messages Naji sent his girlfriend — he wanted to bring her with him, looking first at traveling through Turkey, but noting any single man is stopped and questioned there — which include gunfire in the background and explanations that joining ISIS is more difficult than he thought.

When he got back, Naji had several conversations with informants that included contemplating an attack on Times Square because “they want an operation there” based on the Islamic State posting messages that included “scenes” of the iconic intersection.

“I was saying if there is a truck, I mean a garbage truck and one drives it there to Times Square and crushes them shshshshshsh… Times Square day,” Naji was quoted by prosecutors as saying.

Naji’s attorney, Susan Kellman, said Naji is in shock and that he had traveled to Yemen to see his wife and three children who live there, and sought to cast doubt on the statements prosecutors presented in court as proof he wants to commit acts of terror.

“We don’t know if he actually said those things or if they were fed to him by a confidential source,” Kellman said. 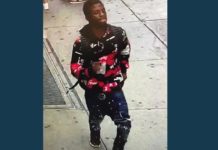