SEOUL, Aug. 31 (UPI) — South Korean Buddhist monks traded blows in a tense altercation outside Seoul after a group demanded the resignation of the chief monk of the temple in Hwaseong, Gyeonggi province.

The standoff on Monday began when a former chief of the temple attempted to enter the grounds in order to hold a provisional meeting to discuss the resignation of Monk Seong Wol, South Korean news agency Yonhap reported.

Seong Wol has been accused of embezzling funds and fathering children out of wedlock, a Buddhist newspaper reported in June.

Monk Jeong Ho, who called for a meeting to discuss Seong Wol’s resignation on Monday, said the resignation is necessary because Seong Wol had “violated religious precepts.” Among other obligations, South Korean Buddhist monks of the Jogye order take a vow of celibacy upon entering the monastery.

Supporters of Seong Wol blocked the entryway and prevented Jeong Ho and other opponents from stepping inside, at which point the group descended into a brawl. South Korean Buddhist news outlet Bulkyo 21 reported the faction trying to enter was far outnumbered by the monks inside the temple. At one point, a monk who attempted to climb the wall was thrown back outside by at least five monks who fought off the protesters.

Seong Wol loyalists ordered the group to leave, and eventually 80 police officers arrived on the scene as the two sides clashed at least two more times. One monk collapsed during the violence and was transported by ambulance to a nearby hospital.

Those inside the temple said they objected to the meeting because they were not consulted ahead of time.

One monk who supported the resignation said a paternity test would reveal the truth regarding the charges against Seong Wol, and Jeong Ho said the accused monk is responsible for the violence on Monday. 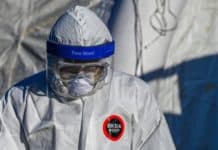