Buttigieg, who himself has faced criticism from Republicans over three weeks spent away from the administration after adopting twins, said family leave remains high on Biden’s agenda even after it was stripped from the social spending proposal at the insistence of centrist Democrats.

“The president put forward a framework that he’s confident can pass the House in the Senate,” Buttigieg told reporters during a White House briefing to discuss the newly-passed, $1.2 trillion bipartisan infrastructure deal.

“I think it’s also no secret how I feel about family leave and how the president does, which is why he proposed it, campaigned on it and will continue to fight for it,” he added.

Biden had initially proposed 12 weeks of paid family leave in the safety net proposal, which Democratic lawmakers are attempting to pass through the Senate by using the filibuster-proof budget reconciliation process. The proposal, however, was first reduced and then eliminated completely from framework as a concession to centrist Sen. Joe Manchin, D-W.Va.

House Ways and Means Committee Chairman Rep. Richard Neal, D-Mass., announced last week that a four-week version of the provision had been added back into the $1.75 trillion deal.

Manchin, however, voiced continuing skepticism, making its chances of passing the Senate murky.

Buttigieg, the first openly gay Senate-confirmed Cabinet official in U.S. history, has fielded heavy criticism from conservatives after taking paternity leave following the adoption of newborn twins with his husband.

Rep. Lauren Boebert, R-Colo., accused him of abandoning the nation while it faces a supply-chain crisis, citing her own delivery of one of her four children while in the front seat of her truck.

“It’s talked about as time off,” Buttgieg said of family leave Monday. “It’s time to do work — good work, joyful work, meaningful work — but it’s time to do important work.” 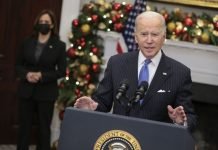