PROVO, Utah, Oct. 26, 2016 (Gephardt Daily) — Brigham Young University students who report being sexually assaulted will no longer be subject to Honor Code reviews and possible penalties including suspension or expulsion, according to a statement released Wednesday.

BYU President Kevin Worthen sent an email to students, faculty and staff members acknowledging that victims of rape and other forms of sexual assault need support after their “devastating experience.”

“As the Advisory Council notes, sexual assault is an abhorrent offense that violates sacred doctrines – such as moral agency, the sanctity of the body and the sacred nature of marriage and sexual intimacy – that are central to the restored gospel of Jesus Christ,” the letter said in part.

“Sexual assault cannot and will not be tolerated at BYU. Our top priority is the safety and well-being of our students. This is particularly true for those who have been the victims of sexual assault.  They have been through a devastating experience, and they are looking for our help and support.  We have an obligation not only to provide that support, both emotional and spiritual, but also to create an environment where sexual assault is eliminated.”

Worthen’s letter follows the release earlier this month of a 34-page study, “Report of the Advisory Council on Campus Response to Sexual Assault,” conducted in-house by BYU administrators and an instructor. The report made 23 recommendations, all of which Worthen accepted, he said.

Of those, five will be implemented immediately, including an amnesty clause that will prevent those who report being sexually assaulted from being judged by the school’s honor code, which bans activities prohibited by The Church of Jesus Christ of Latter-day Saints, the university’s owner.

Banned activities include use of illegal drugs and “sexual misconduct” such as having sex outside of heterosexual marriage and allowing a member of the opposite gender into one’s bedroom, among many other things.

Other Advisory Council recommendations include hiring a full-time Title IX coordinator, hiring a victim’s advocate who can also serve as a counselor and advisor, housing the Title IX and Honor Code offices in separate buildings, and banning the two offices from sharing information without the consent of the victim, except in cases that raise health or safety concerns.

The Advisory Council was created after an incident last year in which BYU student Madi Barney reported being raped. Police took her report, which later ended up being shared with the university, resulting in her being suspended because of honor code violations.

“I felt so angry,” Barney told CNN. “I mean, here she had an over-20-page police report with every little detail of the rape. I feel almost as violated by the school as I do by my rapist.”

Barney took her story public, allowing the use of her name.

“They like to say a victim of sexual assault will never be referred to the Honor Code office for being a victim of sexual assault,” Barney said, in her April 2016 interview with CNN. “But they would’ve never known about these Honor Code allegations had I chosen not to report my rape. And I think that’s what bothers me and makes me feel so betrayed.”

After an organized protest on Barney’s behalf last spring, additional people came forward to report they had been sexually assaulted, then found guilty of honor code violations. Others said they never admitted being raped or sought help because they feared being judged and punished by BYU on Honor Code violations.

The incidents drew global media coverage. Worthen formed the Advisory Council in April of this year. 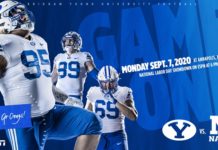 BYU’s first game of season, on Labor Day, to be broadcast on ESPN