June 18 (UPI) — Holy guacamole! A trio of California men were arrested this week after allegedly stealing $300,000 worth of avocados.

Investigators said they believe the suspects were stealing the avocados over the course of several months and selling them on the side for their own profit to unsuspecting customers.

Company officials said the trio got the opportunity when they stopped permitting customers from picking up avocado orders, instead delivering them. But some customers continued to travel to the distribution center. The suspects sold the customers the avocados, but then pocketed the cash.

Typically, police said the trio sold the avocados, usually about $50 per box, for $20 or $30 to keep the unsuspecting customers from asking questions. Investigators believe they were responsible for thousands of illegal transactions. Eventually, it was one of those customers who alerted the company last month something seemed amiss.

Sgt. John Franchi, of the Ventura County Sheriff’s Office, said part of the reason the men were able to get away with so many sales with no one raising a red flag was because of the fruit’s recent spike in popularity.

“They are in demand. Everybody loves avocados,” Franchi said. 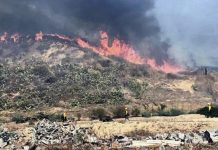