Feb. 17 (UPI) — California Gov. Gavin Newsom is accusing President Donald Trump of ignoring a “real emergency” — the aftermath of the Camp Fire — and instead “manufacturing a crisis” by declaring an emergency of border security.

Newsom, a Democrat who took over as governor on Jan. 7, said Friday $12 billion in funds that Congress approved for disaster assistance for California, Texas, Georgia and elsewhere is “not moving.”

“You have a real disaster that needs to be cleaned up – $12 billion sitting there,” Newsom told reporters at a news conference in Sacramento. “And not even an utterance, not even a reference in today’s press conference [by Trump] of a real, pressing need and a real human crisis that’s manifesting in real time.”

On Thursday, Newsom visited Paradise in Northern California’s Butte County where more than 10,000 homes were destroyed and killed 85 people — the deadliest and destructive in California history.

“These people are under enormous stress and anxiety,” Newsom said Friday. “Survivors are “still waiting for FEMA support. Still waiting for disaster recovery money into their community.”

That includes children who lost their homes and are learning in makeshift classrooms.

Through Wednesday, Federal Emergency Management Agency had provided more than $69 million to Camp Fire survivors for individual and household relief programs. Also, FEMA has provided about $4.5 million to wildfire victims in Southern California, including the Woolsey Fire last November that killed three people and destroyed 1,643 structures.

Trump has previously threatened to cut off funding for wildfire relief because he said the state is not adequately preparing to prevent wildfires.

“Billions of dollars are sent to the State of California for Forest fires that, with proper Forest Management, would never happen,” Trump posted Jan. 9 on Twitter. “Unless they get their act together, which is unlikely, I have ordered FEMA to send no more money. It is a disgraceful situation in lives & money!”

Newsom criticized Trump for focusing on border security and the national emergency declaration for several billion dollars to fund his southern border wall.

“President Trump is manufacturing a crisis and declaring a made-up ‘national emergency’ in order to seize power,” Newsom posted on Twitter. “This ’emergency’ is a national disgrace — and the blame lays solely at the feet of the President.

Our message to the White House is simple: CA will see you in court.”

California and several other states are planning a lawsuit to challenge the declaration. This would be the state’s 46th legal challenge to Trump administration policies.

“Donald Trump, we’ll see you in court,” Newsom said. “Fortunately, Donald is not the last word — the courts will be the last word.”

The governor described the barrier as a “a monument to stupidity.”

Trump wants to build about 200 miles of barrier along the border, adding to the roughly 650 miles of border that already have some kind of wall. Congress had approved about $1.3 billion for barrier fencing, enough for about 55 miles.

The border with Mexico stretches 1,954 miles, including 140 miles with California. The San Ysidro Port of Entry is the busiest land entry in the United States

The Trump administration, through the declaration, is planning to move $2.5 billion from the military’s fund for counter-narcotics activities, $3.6 billion expected from the military’s construction budget and $600 million in Treasury Department drug forfeiture funds.

“No other state will be more harmed than the state of California because of the magnitude of the money,” said the governor, who noted his state could lose funds for counter-narcotics efforts at the border, and local task forces and other operations inland that target drugs.

Trump has said that the flow of drugs is coming into the United States because of lax borders. He said Trump is “delusional” that large amounts of drugs are being carried on backpacks across the border.

Instead, Newsom said drugs are coming through the ports of entry and vehicles, including tractor-trailers, drones, airplanes and boats.

“The legitimate crisis with drugs in this nation can be addressed appropriately and thoughtfully,” Newsom said. “We want to work collaboratively, and we want to work in the spirit of partnership. I don’t want to be a sparring partner with President Trump.”

Newcome said Trump has “made it all but impossible when he plays these games and manufactures a crisis and creates the conditions where we have no other choice than to sue the administration and join other states and join our partners in the federal government to do the same.”

On Wednesday, Trump said he would demand California return $3.5 billion to the federal government after Newsom ended plans for the state’s $77 billion high-speed rail project. Trump called the plan a “‘green disaster” in a Twitter post. 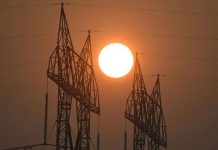 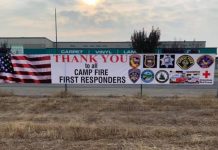 PG&E could face murder charges for role in California wildfires 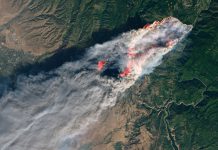 Missing tally in California’s Camp Fire down to 25