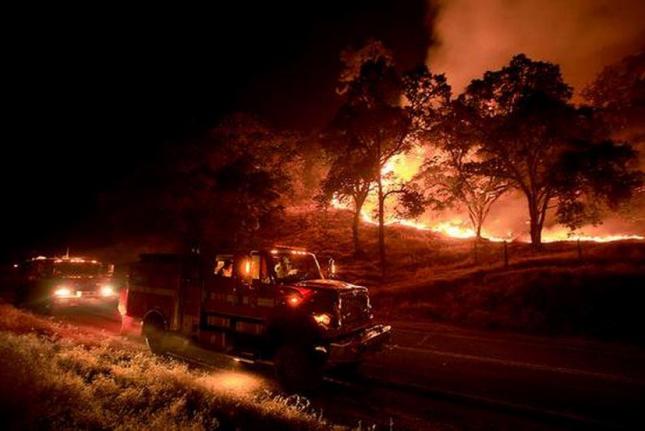 NAPA VALLEY, Calif., July 31 (UPI) — As California Gov. Jerry Brown declared a state of emergency amid a massive wildfire that has torched the Napa Valley, officials on Friday announced that a different blaze had killed one firefighter.

South Dakota firefighter David Ruhl, who had been assisting California forest officials for weeks, died Thursday fighting a wildfire in the northeast part of the state.

“It is with great sadness we must confirm a Forest Service firefighter lost his life yesterday while responding to the Frog Fire northwest of Adin, California,” a statement said on California’s Incident Information System website Friday.

The cause of Ruhl’s death is under investigation.

“This loss of life is tragic and heartbreaking,” Forest Service Supervisor Amanda McAdams said. “Please keep the family and all of our Forest Service employees in your thoughts and prayers during this difficult time.”

The news of Ruhl’s death came just hours after California Gov. Jerry Brown declared a state of emergency as dangerously dry conditions and strong winds fuel the Rocky Fire — which has so far burned nearly 20,000 acres in the Napa Valley.

The blaze grew to 18,000 acres on Friday but was only about 5 percent contained by Friday evening, officials said. Friday morning, authorities issued a mandatory evacuation of residents in Jerusalem Valley — which lies about 100 miles north of San Francisco.

So far, nearly 700 residents have fled their homes since the wildfire started Wednesday— spreading quickly because of wind gusts and dehydrated vegetation amid the state’s ongoing severe drought.

“California’s severe drought and extreme weather have turned much of the state into a tinderbox,” Brown said in a statement Friday. “Our courageous firefighters are on the front lines and we’ll do everything we can to help them.”

“I declared a State of Emergency based on the extreme drought that has now persisted in the state for four years,” Brown noted in the state of emergency declaration. “By virtue of the number of fires burning simultaneously, the state’s resources have been significantly committed such that the state will seek the assistance and resources of other states, as necessary.”

The state of emergency will allow resources to be deployed to the fire-ravaged areas quicker, and permit the assistance of the National Guard if officials need it.

The Rocky Fire has so far destroyed three structures and several outbuildings, officials said. More than 8,000 firefighters are working to extinguish 18 different wildfires across California, the Los Angeles Times reported — and firefighters are worried thunderstorms forecast for the weekend could ignite even more.