July 1 (UPI) — The Los Angeles County Sheriff’s Department is looking into whether the death of a man shot and killed while camping with his daughters in California is linked to previous shootings at the campsite.

Tristan Beaudette, a scientist who worked in pharmaceuticals, was shot in the head June 22 while sleeping inside of his tent with his 2- and 4-year-old daughters at Malibu Creek State Park, a scenic recreation area 25 miles from downtown Los Angeles.

The Los Angeles County corner ruled his death a homicide.

The sheriff’s department said officials are looking for links between the 35-year-old’s killing and seven other shootings dating to November 2016. A motive has not yet been determined.

A sheriff’s department statement said there was no evidence to suggest the previous shootings were related but because motive for Beaudette’s homicide is unknown, all options are being explored.

Other unsolved shootings included a man being shot in the arm while he slept in a hammock and a woman’s car being hit by a bullet while camping with her boyfriend.

“There were a number of incidents but they were over an extended period of time. The pattern at this point certainly is not clear, if there is one at all,” Sheriff Jim McDonnell said. 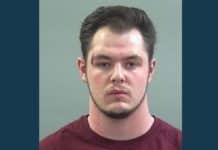