March 5 (UPI) — A federal judge in Washington, D.C., ordered a two-month continuance Thursday in the case of a man photographed sitting at House Speaker Nancy Pelosi‘s office desk during the Jan. 6 riot at the Capitol.

Richard Barnett, 60, erupted at U.S. District Court Judge Christopher R. Cooper during the virtual hearing. The adjournment means he’ll be detained until the next hearing.

“I’ve been here a long time … another month … it’s not fair,” he said. “You’re letting everyone else out … I need help.”

In the time between now and the May 4 hearing, Barnett’s attorney will be able to make bail applications on his behalf.

Days after the insurrection, Barnett was arrested in his hometown of Gravette, Ark., by the FBI after a video showed him with his feet up on Pelosi’s desk.

Another video showed him boasting about taking an envelope from her office. 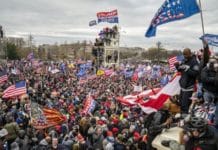 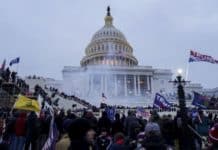