The retired firefighter, Robert Sanford, 55, of Boothwyn, Pa., was among a slew of new arrests associated with the riot — made in part through identifications through in social media photos and videos.

Officials arrested Sanford on Wednesday in Pennsylvania, where he made his first court appearance. He’ll be prosecuted by the Justice Department in Washington.

He faces charges of knowingly entering or remaining in any restricted building or grounds without lawful authority, disorderly or disruptive conduct on Capitol grounds, civil disorder, and assaulting, resisting or impeding certain officers while engaged in the performance of official duties.

Police also arrested a father-son pair — Kevin Seefried and Hunter Seefried — who surrendered to police in Delaware. They each were charged with knowingly entering or remaining in any restricted building or grounds without lawful authority, and violent entry and disorderly conduct on Capitol grounds.

In a statement of facts, the FBI said the men traveled from their homes in Delaware to Washington, D.C., to hear President Donald Trump speak at the Ellipse. They then said they marched to the Capitol, following a man using a bullhorn.

Officials said video footage from the scene shows Hunter Seefried help others knock out a window in order to enter the Capitol building. Photos later showed the younger Seefried inside the building, carrying a Confederate flag he said normally flies outside his home.

And in California, authorities arrested Hunter Allen Ehmke on allegations he broke a window at the Capitol. He was detained by the Los Angeles County Sheriff’s Department but is expected to be prosecuted out of Washington, D.C.

He faces charges of damaging or destroying government property, obstruction of an official proceeding, and violent entry and disorderly conduct on Capitol grounds.

A statement of facts by the FBI said Capitol Police originally arrested Ehmke during the riot, but were forced to release him when a large crowd of rioters threatened them.

The officers seized Ehmke’s license and informed him he would be arrested at a future date.

On Tuesday, Justice Department officials said they opened files on at least 170 people and at that point had arrested some 70 individuals related to the Jan. 6 attack at the Capitol.

Michael Sherwin, acting U.S. attorney for the District of Columbia said authorities filed dozens of criminal complaints in the days since the riot — many on minor charges. He said more serious charges will likely come once formal indictments are handed down.

The House on Wednesday voted to impeach Trump for inciting the violence. 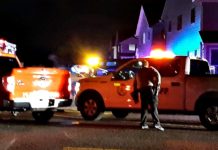