Feb. 27 (UPI) — Disgraced Cardinal George Pell’s bail application was withdrawn Wednesday, a day after news broke of his guilty verdict for having sexually abused two boys in the 1990s.

Following a pre-sentencing hearing in Melbourne, Australia, the former close adviser to Pope Francis was taken away in police custody to spend his first night in jail, the Sydney Morning Herald reported.

Pell, 77, was found guilty during a December trial of forcing a 13-year-old choirboy to perform oral sex on him and of molesting another child in 1996.

The verdict was made public Tuesday following the lifting of a media suppression.

On Wednesday, Pell entered the courtroom with the use of a cane and was told that each of his five charges came with up to 10 years in prison.

Prosecutor Mark Gibson called on the court to keep the former Vatican treasurer behind bars until sentencing on March 13 due to the seriousness of his offenses and the fact that he has never shown any remorse.

Pell’s attorney Robert Richter then characterized his defendant’s crimes as “no more than a plain vanilla sexual penetration case where the child is not volunteering or actively participating.”

Chief Judge Peter Kid disagreed, saying it was a “serious example of this kind of offending.”

Pell still maintains his innocence, despite the verdict, his lawyers said in a statement following the pre-sentencing hearing.

“Cardinal Pell has always and continues to maintain his innocence,” the statement said.

It continued that he did not apply for bail Wednesday because “he believes it is appropriate for him to await sentencing.”

His lawyers said that an appeal to the verdict has already been lodged.

“Like any person, he has the right to pursue his legal rights and will do so,” it concluded. 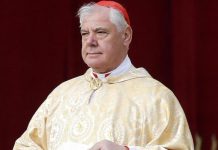