The Orbital ATK Cygnus cargo ship, which was carrying 7,700 pounds of food, experiments and other items, successfully docked over the weekend. Expedition 51 Commander Peggy Whitson of NASA worked with flight engineer Thomas Pesquet of the European Space Agency to capture the John Glenn with the Canadarm2 robotic arm at 6:05 a.m. EDT Saturday.

Flight controllers at the Johnson Space Center in Houston then pulled the Cygnus into the station’s central Unity module at 8:39 a.m. EDT.

“We’re very proud to welcome on board the S.S. John Glenn,” said Pesquet, a French astronaut. “The more than three tons of pressurized cargo in the Cygnus spacecraft will be put to good use to continue our mission of research, exploration and discovery.”

Glenn, the first American to orbit Earth in 1962, died in December at age 95 and was buried earlier this month at Arlington National Cemetery.

In 1998, he returned to space aboard shuttle Discovery, at age 77, before station construction began in orbit.

It has been a busy week on ISS. On Thursday, the Soyuz MS-04 crew ferry ship carrying commander Fyodor Yurchikhin and flight engineer Jack Fischer arrived at the space station. They joined Whitson, Pesquet and Soyuz MS-03 commander Oleg Novitskiy, 10 days after three others returned to Earth.

Whitson, Pesquet and Novitskiy have been living in the space station since November.

Whitson, who has flown in three space missions, holds the record for most spacewalks by a female astronaut.

The S.S. John Glenn will remain with the station until July, when it will be let go to burn up in the atmosphere along with spent equipment and other refuse. 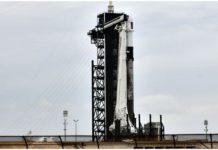 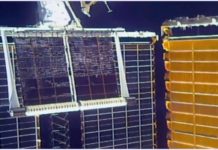