Oct. 18 (UPI) — Catalan President Quim Torra on Thursday said he plans to push for another independence referendum as the region undergoes the fourth day of protests against Spain’s sentencing of separatist leaders earlier this week.

Torra said he plans to have a vote by the start of the next Parliament term, at the end of 2021.

“We’ll return to the ballot box again on self-determination,” he told Parliament. “If all parties and groups make it possible, we have to be able to finish this legislative term by validating independence.”

His speech came days after the Spanish Supreme Court sentenced nine Catalan separatists to between nine and 13 years in prison for attempting to declare independence after a referendum in 2017.

All nine were found guilty of sedition in their efforts to break Catalonia — an autonomous community in northeastern Spain — away and create its own state, but none was convicted of rebellion, the most serious of the charges they faced. Three others were found guilty of disobedience but will not serve prison time.

Torra, who was elected in May as the first Catalan leader since former Prime Minister Carles Puigdemont’s administration was sacked in 2018, campaigned on a secessionist agenda.

Not all separatist leaders in Parliament supported Torra’s statement.

“Now is not the moment to set deadlines,” said Sergi Sabrià, a member of Parliament who belongs to the Republican Left of Catalonia Party.

Protests began Monday shortly after the Supreme Court’s ruling, and have continued for four days. The BBC reported that at least 96 people have sustained injuries in the demonstrations.

Torra called for an end to the violence, which he blamed on infiltrators.

“We will not permit incidents like those we are seeing in the streets,” he said. “This has to stop right now. There is no reason nor justification for burning cars, nor any other vandalism.” 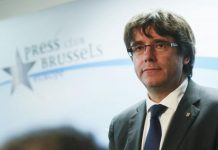 Ex-Catalan president turns himself in to Belgian authorities 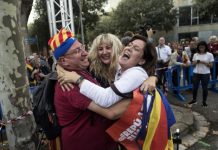