March 20 (UPI) — Mexican authorities are maintaining a yellow alert warning after eruptions at the Popocapetl volcano occurred on two of the last three days.

Residents of Puebla said the eruption shook the windows in their homes about 30 miles to the east.

Gerardo Reyes, an emergency coordinator in Cuernavaca, said the seismic activity was within the parameters of the yellow alert, which means eruptions can occur and spread ash to nearby areas. There is a security area of a 7.5-mile radius around the volcano.

Schools were open in Puebla and other cities Tuesday, though authorities ordered residents to stay away from the crater area and ignore rumors that could lead to panic, El Sol de Puebla reported.

The Popocatepetl volcano is located in the states of Morelos and Puebla in central Mexico. Reaching higher that 17,800 feet, it’s the second-highest peak in Mexico after the Citlaltepetl volcano.

The Pico de Orizaba, as Popocatepetl’s peak is known, is frequented by mountain hikers and is said to be visible from ships in the Gulf of Mexico. 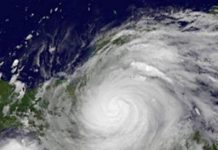