Aug. 20 (UPI) — Police arrested a Chicago man who allegedly made threats on online to “slaughter and murder” people at a women’s reproductive clinic, federal prosecutors said.

Farhan Sheikh, 19, was arrested last Friday for allegedly posting the threats to iFunny, a social media forum, according to a statement by the U.S. Attorney’s Office for the Northern District of Illinois.

Sheikh has been charged with transmitting a threat in interstate commerce, a crime punishable by up to five years in prison.

According to the complaint, Sheikh had posted to the forum that he was “done” with Illinois’s abortion laws that allow for “kids to be slaughtered” in the name of women’s rights.

“I’m DONE,” he posted, stating this Friday he would go to the clinic, which authorities did not name, and “proceed to slaughter and murder any doctor, patient or visitor I see in the area and I will not back down.”

FBI agents executed a search warrant on Sheikh’s residence Aug. 16, during which he was present and admitted to being the user who posted the threats. When asked why he thought the FBI was searching his home, he said he thought it was due to a “joke” he posted to the site, according to the complaint.

Authorities also said that Sheikh posted about another iFunny user, 18-year-old Justin Olsen from Ohio, who was arrested earlier in August by the FBI for threatening clinic Planned Parenthood and federal agents on the social media forum while in possession of a cache of weapons. Sheikh also told the agents that he subscribed to his iFunny account.

Sheikh made his first court appearance Monday before U.S. Magistrate Judge Susan E. Cox, who ordered him to remain in custody pending a detention hearing on Tuesday. 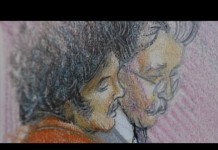