Dec. 21 (UPI) — The top attorney in Chicago has resigned as fallout continues to grow over a botched police raid on the home of a Black woman nearly two years ago and attempts to keep body camera footage of the incident from the public.

In a statement reported by NBC Chicago, Corporation Counsel Mark Flessner announced he had offered Chicago Mayor Lori Lightfoot his resignation on Sunday, stating “it is clear that the raid on Anjanette Young’s home was a tragedy that we must learn from.”

“Standing up for racial injustice and fighting for equality within our justice system are crucial matters that we must continue to work toward addressing as a community,” he said.

Lightfoot said in a statement Sunday that she has accepted his resignation.

“I am committed to a full review of everything that occurred surrounding this incident, will take corrective action where appropriate and will hold people accountable,” she said.

In February 2019, police mistakenly raided Young’s home, arresting the naked and crying woman whom police placed in handcuffs despite her repeated declarations that they were in the wrong apartment.

Controversy over the incident erupted earlier this month after it came to light that the mayor’s law enforcement had tried to prevent a local news station from airing the body camera footage of the raid.

On Friday, Lightfoot, who has denied knowing about the law enforcement’s move to bar the release of the body camera footage, said in a statement that it was “a mistake.”

The court had previously ruled against the Lightfoot administration who had petitioned the court to prevent the footage from being aired.

“I have instructed them to formally withdraw our request to the court so that the record reflects this even though it was previously ruled upon,” she said.

In a press conference, she told reporters that she was “completely and totally appalled” by the raid.

“Yes, I am mayor, but, absent that reality, I could have easily been Ms. Young, and I can put myself in her place,” she said. “And I have been thinking since I saw that clip of the video, about having police officers break down my door, at night, while my child was at home, all of that is horrifying to me.”

She said the dignity that all deserve was taken from Young that night.

“That is simply inexcusable,” she said.

Lightfoot said she became aware of the raid on Tuesday.

The Chicago Police Department has since released 20 video clips of the Feb. 21, 2019, raid.

In the footage, a crying, handcuffed Young is told by officers that the raid was being conducted due to a person at the apartment with a firearm.

Young can be heard telling the officers through tears that “they got the wrong place.” 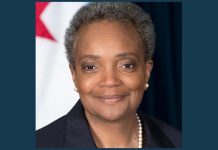 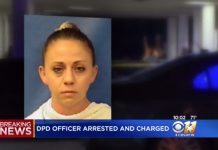