July 12 (UPI) — A leading Chinese newspaper is calling for cool heads to prevail as a trade war heats up with the United States.

State-run People’s Daily said in a front-page editorial on Thursday it is “rationality” that is needed when confronting a “crazy Trump administration.”

The statement comes after U.S. officials said Tuesday they would slap 10 percent tariffs on an additional $200 billion worth of Chinese imports.

“International opinion is that the Trump administration’s maverick style is clearly a sign that they are crazy,” People’s Daily said.

“The trade war the Trump government has provoked is irrational, and a self-centered position.

“Because the United States has the world’s largest trade deficit, they will also suffer the greatest losses.”

People’s Daily went on to cite United States’ history and the “chaos” of its contemporary society as causes for bad policy and not only the ideas of President Donald Trump and his advisers.

“The Trump government’s ‘America first’ policy is an outcome of the United States’ belief in its exceptionalism, unilateralism, trade protectionism, economic nationalism and white supremacy,” the Chinese newspaper said, adding the trade war is likely to be waged for the long term.

Trade tensions have caused concerns in the financial sector but on Thursday Asian markets closed higher, according to South Korean news agency Yonhap.

The Chinese currency depreciated in value in response to the conflict, and by Thursday the People’s Bank of China set the daily reference rate at 6.6726, or higher than estimated by Bloomberg. 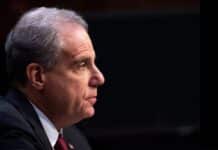