In addition to the prison time, U.S. District Court Judge Vernon Broderick fined Chris Collins $200,000 and sentenced him to one year of supervised release.

“I violated my core values,” Chris Collins said in court. “I am standing here, probably the last time I will do anything in public. I left Buffalo. I cannot face my constituents.”

Police arrested Chris Collins in August 2018 on the insider trading charges, to which he immediately pleaded not guilty. He initially suspended his re-election bid but stayed on the ballot and secured his seat for a fourth term.

He maintained his innocence in the case until September when he resigned his seat in Congress. He pleaded guilty in October.

Chris Collins was the first member of Congress to publicly endorse Donald Trump in his presidential election in February 2016.

Cameron Collins and Zarsky also were indicted in the scheme and both pleaded guilty to charges in October. Each faces between 37 months and 46 months in prison. 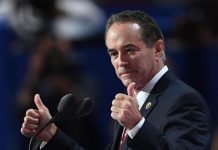