Dec. 6 (UPI) — Model Christine Keeler, known for her role in the notorious Profumo affair that shook Britain’s government, died at the age of 75, her son said.

Keeler’s son, Seymour Platt, shared the news of his mother’s death on Facebook. He hailed her for earning “her place in British history but at a huge personal price.”

“My mother, the grandmother to my beautiful little girl, passed away late last night. She suffered in the last few years with chronic obstructive pulmonary disease but lost the fight,” he wrote. “As many of you know my mother, Christine Keeler, fought many fights in her eventful life, some fights she lost but some she won.”

Keeler died at the Princess Royal University Hospital in Farnborough at about 11:30 p.m. on Monday, Platt told The Guardian.

While working as a cabaret dancer in 1961, Keeler met Tory Cabinet minister John Profumo and the Russian military attache Yevgeny Ivanov, and engaged in affairs with both men.

When her affair with Profumo came to light, he was forced to resign from the Cabinet and the Commons after admitting to lying to the House about his relationship with Keeler.

The case had major security implications and contributed to the downfall of Harold Macmillan‘s Conservative government.

“There was a lot of good around Chris’ rather tragic life, because there was a family around her that loved her,” Platt said of his mother. “I think what happened to her back in the day was quite damaging.”

The sentence came as the result of a trial against Aloysius “Lucky” Gordon, a man Keeler’s family and friends said abused and stalked her. The subsequent investigation caused details of her affair with Profumo to become public.

“She was stalked and didn’t really have anywhere to turn to. It made her very vulnerable and extremely mistrusting of men. There weren’t a lot of male figures as I grew up because she wanted to protect me from men,” Platt said.

Born in Uxbridge, Middlesex, Keeler was married twice and lived under the name “Sloane” for several years following the scandal.

She is survived by her son James from her first marriage, Seymour from her second and a granddaughter.

“She was just a young girl having fun during the burgeoning of sexual liberation. She picked up labels, which I think were quite unfair,” Platt said. “Chris was feisty. And she would never shy away from a fight. She had a terrific sense of fairness. She would stand up against anybody she thought was doing the wrong thing. And that is something I am very proud of. And hopefully, if there is one lesson I can learn from her, it would be that.” 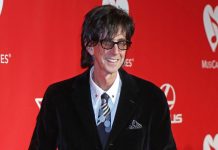