AUSTIN, Texas, Aug. 3 (UPI) — Civil rights groups and the state of Texas have reached a compromise after a federal judge struck down the state’s restrictive voter identification requirements, saying they constituted discrimination against minority voting rights.

Under terms of the deal, voters who do not possess one of the seven valid forms of identification specified under the law will be allowed to fill out an affidavit ballot after swearing they were unable to procure a valid state-issued photo ID.

In order to obtain the affidavit ballot, voters will still need to show some form of government or business document, including a utility bill, government or payroll check, bank statement or birth certificate that includes the individual’s name and address. Additionally, poll workers are prohibited from questioning the validity of such documents unless clear evidence exists of a voter intentionally trying to commit fraud.

The Fifth Circuit Court of Appeals struck down the Texas voter ID law, widely regarded as the strictest in the nation, because Judge Nelva Gonzalez Ramos said minorities were much more likely to lack the forms of ID considered valid under the law, making it discriminatory. Under the law as originally written, any voter lacking state-issued photo ID or a passport would have been denied the right to vote on Election Day.

Opponents argued as many as 600,000 legal voters in the state — a majority of them racial minorities — could have been turned away because they lacked the proper ID to vote.

The judge still must sign off on the compromise. A hearing has been scheduled for next week.

The compromise also requires Texas to spend $2.5 million on a voter education and outreach campaign about the new rules surrounding voting, including the fact those lacking photo ID can still obtain an affidavit ballot without being questioned. 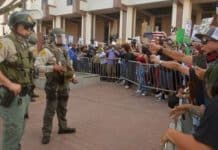