ST. LOUIS, Sept. 24 (UPI) — A new clinical trial will test whether the drug ATryn, or antithrombin recombinant, is effective at treating preeclampsia to increase the length of pregnancy and reduce the rates perinatal mortality and disability.

Preeclampsia is a condition characterized by high blood pressure, high levels of protein in urine and swelling in the hands and feet. It occurs in 5 to 8 percent of pregnancies, generally developing anywhere between the 20th week of pregnancy and as late as 6 weeks after giving birth.

ATryn already is used as an anticoagulant to prevent blood clots in patients with a rare disease called hereditary antithrombin deficiency. The drug is made from the milk of goats genetically engineered to produce human antithrombin in their milk.

“I am treating two patients — the mother and the child,” said Dr. Erol Amon, a professor of maternal-fetal medicine at Saint Louis University School of Medicine, in a press release. “If we were only concerned about the health of the mother, then we would deliver immediately. However, keeping the fetus in the womb increases the opportunity for lung maturity and improves outcomes for the child. We are concerned with both maternal and fetal health.”

Amon said the trial is aimed at extending the pregnancy of women in their second trimesters, and so researchers have focused on recruiting women who are between their 23rd and 30th week of pregnancy.

Pregnant mothers with preeclampsia in their second trimester are being offered the drug once they are stabilized. SSM St. Mary’s Hospital in St. Louis was chosen for the trial because it is a high-risk pregnancy center, Amon said.

Previous trials have shown that ATryn can extend pregnancies by about a week. The drug has been shown to work in trials in Japan and Italy, and Amon says the hope is to improve on times seen in the earlier trials.

He said there is concern about American women in comparison to other populations because of higher incidence and intensity of hypertensive disorders.

There is no specific known cause of preeclampsia, however mothers who are obese, have diabetes or hypertensive disorders, or are teenagers are at higher risk of developing the condition. 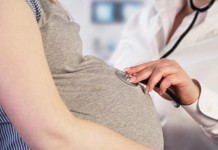