Thrasher, 19, the women’s NCAA air rifle champion, attends West Virginia University, where she beings her sophomore year next week. She was not considered a gold medal contender coming into the Rio Games and, in the finals, defeated two Chinese shooters who have medaled in the event previously.

Thrasher scored an Olympics finals record 208.0. She defeated China’s Du Li, who won the silver with a score of 207.0 and Yi Siling, who won bronze.

The world’s No. 1 ranked shooter in the event, Serbia’s Andrea Arsovic, failed to advance to the finals.

Speaking to NBC’s Dan Patrick, Thrasher said she was thrilled to get the U.S. delegation to Rio off on the right foot.

“I’m so overwhelmed. It hasn’t even sunk in yet,” Thrasher said.

She said she realized after qualifying for the finals she was in just as good a position to win as any of the more experienced competitors she was facing.

“Once you make the finals, the top eight go on and it’s back to zero. It’s anyone’s game.”

Of her new gold medal, Thrasher said: “It’s very heavy. It is. It feels great to have it.”

The U.S. team notched its second medal of the day later on, winning silver in the men’s team archery event. 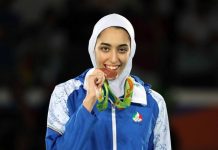 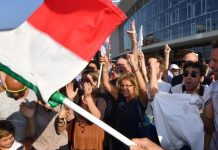