HOUSTON, Oct. 13 (UPI) — Aggressive action from those opposed to building the Dakota Access pipeline project is out of step with conventional protest action, an energy coalition said.

During the weekend, a federal appeals court backed a lower court’s ruling that construction can proceed in the face of challenges to the extent of U.S. Army Corps of Engineers consultation with tribal groups concerned about the sanctity of sacred sites.

More than 100 people have been arrested since protests swelled during the summer. Last week, the state government in North Dakota called for support from neighboring states to respond to pipeline protests.

On Monday, two country sheriff’s departments in North Dakota announced the arrest of 27 people they said were “inciting a riot [and] engaging in a riot” during protests of the pipeline. Two of those people were arrested after chaining themselves to construction equipment.

The Consumer Energy Alliance expressed concern about the action taken by those opposed to the pipeline.

“The steps taken by these individuals to sabotage pipelines – in addition to the threats, intimidation, and cyber-bullying tactics they are using – clearly show that their agenda has nothing to do with protecting the environment and everything to do with shutting down the American economy and hurting everyday Americans, families, small business, and our economic way of life,” CEA President David Holt said in a statement.

North Dakota sheriffs said they were concerned that few people actually from the state were involved in acts considered aggressive. The Standing Rock Sioux Tribe, which is challenging the pipeline’s construction through the courts, said Monday it was asking its supporters to contact the White House to express their concerns.

The tribe said it’s concerned about the potential impact to the quality of the water in the Missouri River.

The partnership behind the pipeline said it’s needed to accommodate and distribute the amount of crude oil being produced from the Bakken shale oil basin in North Dakota. Rail takes away some of the oil from North Dakota, a transport method that has its own public safety risks. At least 40 people were killed in Lac-Megantic, Quebec, in the 2013 derailment of a train carrying tankers of crude oil from North Dakota to Canadian refineries. 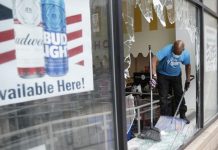 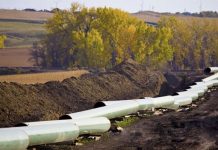