Crowds cheered as a bronze statue of a Confederate soldier — known as “At Ready” — was removed by a crane.

The statue was not the focal point of 2017’s Unite the Right rally, but was a block away from the statue of Confederate Gen. Robert E. Lee white supremacist and neo-Nazi groups said they organized the event to defend.

During that rally James Fields, Jr., drove his car into a crowd of antiracist protesters, killing one and injuring several others. He has since been sentenced to life in prison.

The mood in Charlottesville was celebratory, with people wearing Black Lives Matter shirts and dancing to music from a student radio station that included Mavin Gaye, Stevie Wonder and Sly and the Family Stone.

“This is a magnificent moment,” said community organizer Don Gathers, 61. “Much of the racial tension, strife and protest we’re seeing across the country emanates from right here in Charlottesville. But now we’re moving the needle in a positive way.”

“At Ready” had stood in front of an Albemarle County Courthouse since 1909 — one of dozens of such statues erected not in the immediate aftermath of the Civil War, but decades later as Southern states began to institute legal segregation.

Charlottesville City Council Member Kristin Szakos told WVIR last month the county commission decided to permit the removal of the statue — which had previously been explicitly illegal — that the statue was a symbol of injustice.

“Clear to every Black defendant who must pass them on the way into court: ‘this space is reserved for the Confederate cause. You will find no justice here,'” she said. 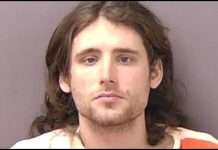 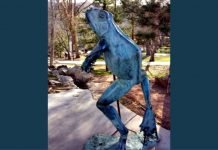