Cohen told ABC the House and Senate investigators want him “to provide information and testimony” about any contacts with people connected to the Russian government.

“I declined the invitation to participate, as the request was poorly phrased, overly broad and not capable of being answered,” he told ABC News in an email Tuesday.

A congressional aide confirmed to NBC that the request letters were the same ones sent to former Trump aides Carter Page, Roger Stone, Paul Manafort and Mike Flynn.

On May 18, Senate Intelligence Committee Chairman Richard Burr told news media that attorneys for Flynn told him the former adviser won’t obey a subpoena to cooperate as part of its investigation.

Cohen allegedly attended a secret meeting in Prague to discuss Russia’s hacking of Democratic targets, according to a dossier on Trump prepared by former British spy Christopher Steele.

In February, Cohen told NBC News he was taking his son to a meeting with the baseball coach at the University of Southern California in Los Angeles when the Prague meeting was supposed to have taken place.

Trump, during a news conference before becoming president in January, said he saw Cohen’s passport and it didn’t show he was in Prague.

Another close Trump confidant, Jared Kushner, a senior adviser and his son-in-law, last week was identified as a person of interest in the investigation, according to a Washington Post report. He allegedly spoke with a Russian ambassador in December about setting up a secret back channel between the Trump campaign and the Kremlin on diplomatic matters. 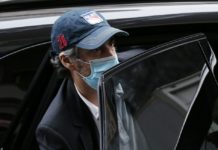