McConnell said deputy Sergeant-at-Arms Jennifer Hemmingway will take over for Stenger and that Congress will “examine the serious failures that transpired yesterday and continue and strengthen our preparations for a safe and successful inauguration on Jan. 20.”

His resignation came hours after Pelosi called for him to step down.

“I am calling for the resignation of the chief of the Capitol Police, Mr. [Steven] Sund,” she said.

“There was a failure at the top of the Capitol Police, and I think Mr. Sund … he hasn’t even called us,” she added.

Senate Democratic leader Chuck Schumer earlier said he would fire Stenger after taking control of the Senate if he remained its sergeant-at-arms.

House Democrats said Thursday they will conduct a review of security measures at the U.S. Capitol after rioters supporting Trump were able to storm the building with apparent ease.

Lawmakers, former police officials and security analysts expressed anger and amazement over how Capitol Police appeared completely unprepared for the anger and aggression of the president’s backers, who sent lawmakers scurrying for safety as they forced their way into the building.

House Committee on Appropriations Chairwoman Rosa DeLauro, D-Conn., and House Appropriations Subcommittee on the Legislative Branch Chairman Tim Ryan, D-Ohio, called the incident a “coup attempt” and said the breach raises “serious questions about what law enforcement did and what they should have done differently.”

In a statement, they vowed to “get to the bottom of these breakdowns and prevent them from ever happening again,” starting with hearings by Ryan’s subcommittee to “directly question key leaders about what went wrong.”

The rioters had been egged on by Trump to march to the Capitol at a protest rally on the National Mall earlier in the day during which he pressed his baseless claims that the election was “stolen” from him.

While one protester was shot and killed by police, other officers appeared to stand by and watch as the mob entered the Capitol building, roaming through its halls and ransacking offices as they sought to disrupt the certification of President-elect Joe Biden’s victory.

Security analysts noted that no specialized police units were stationed in front of the Capitol despite the tense atmosphere in the city and violent clashes between Trump’s backers and police the previous night.

“I was wondering, where were the cops? If they don’t get there soon, what else could transpire?” she told NBC. “It felt like a very long time, and I’m sure millions of people were also watching and thinking the same thing.”

Given the heated political rhetoric over the counting of Electoral College votes underway at the Capitol, Best said it shouldn’t have come as a surprise that there would be a large protest there.

“It all paints a picture and sets a tone for what is likely to occur,” she said. “It’s all about the staffing. Given what we’ve seen over the last several months, it shouldn’t shock people.”

“What happened here is a colossal failure, and I believe it’s a colossal political failure, not on the part of the police,” former Boston Police Commissioner Ed Davis told USA Today. “They were outnumbered and overrun.”

Rather, he said, the violence was “the result of a lack of political will to control an attempted insurrection.”

“How it happened, I can’t figure that out,” former Capitol Police Chief Kim Dine said, adding that he was surprised arrests weren’t made as soon as rioters gathered on the Capitol steps, which is illegal.

Rep. Annie Kuster, D-N.H., said Thursday she feared for her life when the rioters stormed the Capitol.

“I was frightened that it would be a mass casualty incident, that if they had automatic weapons they could have killed hundreds of members of Congress,” she told CNN, adding, “It wouldn’t be unusual to come and present your opinion, but these were terrorists. These were thugs. These were dangerous people.”

Washington, D.C., Mayor Muriel Bowser ordered that a state of public emergency she initially declared on Wednesday would be extended for 15 days until Jan. 21 — one day after Biden is expected to be inaugurated.

“They have fired chemical irritants, bricks, bottles, and guns. They have breached the security of the Capitol and their destructive and riotous behavior has the potential to spread beyond the Capitol.

“Their motivation is ongoing. Today, they sought to disrupt the congressional proceedings relating to the acceptance of electoral college votes.” 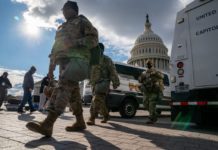 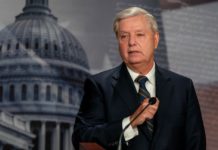 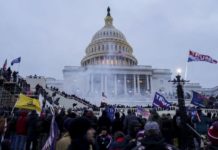