June 13 (UPI) — The nation’s consumer price index inched up 0.1 percent in May on a seasonally adjusted basis, slowing from April when it rose 0.3 percent, the U.S. Bureau of Labor Statistics reported Wednesday.

The 0.1 percent increase was the smallest increase since January, MarketWatch reported, matching its analysts’ forecast.

Wednesday’s report said that the consumer price index, which measures the change in prices paid by customers for goods and services, has increased 1.8 percent over the last 12 months before the seasonal adjustment.

Food prices jumped 0.3 percent last month, but the energy index tumbled 0.6 percent, with gasoline falling 0.5 percent in May. The index for all other items minus food and energy increased 0.1 percent, the report said.

The index for all urban consumers increased by 1.8 percent for the past year while it jumped 1.7 percent for urban wage earners and clerical workers. For the month, the index increased by 0.2 for each before seasonal adjustments. 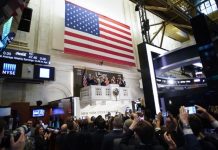