July 18 (UPI) — The Minneapolis police officer who fatally shot a woman who called 911 for help has refused to be interviewed by authorities investigating the shooting, according to the Minnesota Department of Public Safety.

Officer Mohamed Noor shot 40-year-old Justine Ruszczyk, who also went by her fiancee’s last name of Damond, in the abdomen as she stood in the alley behind her home and told the Bureau of Criminal Apprehension that we will not consent to an interview about the incident.

The BCA is conducting the investigation into the shooting at the request of the MPD.

“Officer Noor has declined to be interviewed by BCA agents at this time. Officer Noor’s attorney did not provide clarification on when, if ever, an interview would be possible,” said the statement.

But Officer Matthew Harrity, the other officer who was in the squad car when Noor opened fire has been interviewed.

According to the MDPS statement, Noor and Harrity were nearing the location of the eventual shooting when “Officer Harrity indicated that he was startled by a loud sound near the squad. Immediately afterward Ruszczyk approached the driver’s side window of the squad. Harrity indicated that Officer Noor discharged his weapon, striking Ruszczyk through the open driver’s side window.”

The MDPS statement did not indicate whether Harrity gave a rationale for the shooting.

It went on to say that the two officers saw an “18-25 year old white male” bicycling near the scene prior to the shooting who had stopped to watch the officers provide medical assistance to Ruszczyk. The BCA said it would like to speak to that person as part of its investigation but that it had no further scheduled interviews to conduct at this time.

Both Noor and Harrity are on paid administrative leave during the investigation.

Few details have been released about the fatal shooting of Ruszczyk other than that she was unarmed and both officers did not have their body cameras on at the time of the incident.

The shooting has inspired protests in Minneapolis and Ruszczyk’s family has asked for more transparency and immediate action.

“My mom is dead because the police officer shot her for reasons I don’t know and I demand answers,” said her stepson, Zac Damond. “And if anybody can help just call the police and demand answers.

It has also gained attention in Ruszczyk’s native Australia.

“This particular case is so bizarre. People are gripped by the story,” said Andy Ruzgar of 5AA Radio in South Australia, reported the Minneapolis Star Tribune. 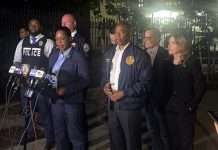