KENNEDY SPACE CENTER, Fla., July 21 (UPI) — Kennedy Space Center in Florida marked the 50th anniversary of the Apollo 11 moon landing Saturday with MoonPies, vintage Corvettes, a visit from Vice President Mike Pence and Apollo astronauts Buzz Aldrin and Harrison Schmitt, and a large crowd of visitors from around the world.

“I saved up for two years to be here for the anniversary,” said Peter Anker, 43, a software developer from Copenhagen, Denmark.

Anker poured himself a second glass of bright orange Tang at the space center’s visitor complex. His wife, daughter and son sat at a table nearby. They’ve booked a tour of the space center with Apollo astronaut Al Worden later in the week.

Artificially flavored Tang was used by NASA on John Glenn’s Mercury flight in 1962 and in later Gemini missions. It was not invented for the space program, though many people thought it was.

“I wanted to see it for myself because I have loved space ever since I got a toy space shuttle as a boy,” Anker said. “This is what started it all, the shuttle, the space station — the Apollo era was the beginning.”

Aldrin, Neil Armstrong and Michael Collins lifted off from the space center on July 16, 1969. Aldrin and Armstrong walked on the moon four days later.

Mary Banasik, who has worked at the space center for 30 years, wore an Apollo 50th anniversary T-shirt, matched by husband Joe as they took in movies and presentations about Apollo missions. MoonPie cookies in a special 50th anniversary tin were handed out to employees and visitors alike.

“Everybody who works here takes great pride in our history and this anniversary,” she said. “We’ve been busy through the years, but now we’re working on trying to get the next flight with people going to space, and that’s exciting.”

Neil Armstrong’s blue 1966 Corvette was on display at the Visitor Center, attracting a large crowd. It’s owned by car restorer Joe Crosby, 75, who lives nearby in Merritt Island.

He answered questions about Armstrong and the car, while shooing away anyone who touched the classic for more than a brief instant.

The Corvette was one of many sold to astronauts by Jim Rathmann Chevrolet in Melbourne, Fla. Only one owner had it for decades in between Armstrong and Crosby.

Along with MoonPies and Tang, Crosby’s Corvette and many others parked at the visitor center evoked the late-1960s era of the first moon mission.

“The car is a piece of history. It appeals to car people, space people. There could only ever be one person who did what Neil did, so I hope somewhere down the line a museum will have the car,” said Crosby.

He recalled standing outside a restaurant in nearby Titusville to watch the Apollo 11 Saturn V rocket lift off. Like many others celebrating the anniversary, Crosby said he’s sorry that manned missions to deep space ever ended.

Pence used the Saturday afternoon fervor of the moonwalk anniversary to promote the Trump Administration’s goal of returning people to the moon by 2024. The president added $1.6 billion to his budget for moon mission planning this year, and NASA believes another $20 to $30 billion will be needed to make the five-year deadline.

Pence praised Aldrin and thanked Neil Armstrong’s son, Rick, as they looked on. The vice president paused for applause after recognizing Aldrin, who stood and saluted the crowd.

“Standing before you today, I’m proud to report, America will return to the moon within the next five years,” Pence said. “And the next man and the next woman on the moon will be American astronauts.”

Pence praised the effort and leadership that President John F. Kennedy showed by challenging the nation.

“Make no mistake about it, the moon was a choice — an American choice,” he said.

Pence said the nation is investing in new rockets and spaceships and unleashing a burgeoning new private space industry, and that Americans would travel into space again from American soil this year.

Pence noted that his afternoon address was occurring at the time that, 50 years ago, Aldrin and Armstrong were descending to the lunar surface, a trip made more harrowing by an alarm code warning about computers overloading and a last-minute realization that the chosen landing site was too rough and strewn with boulders to be safe. Armstrong had to fly the lander to a safer spot as fuel ran low.

“We honor these heroes today and America will always honor our Apollo astronauts,” Pence said. 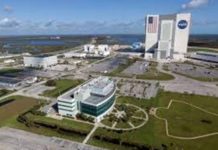 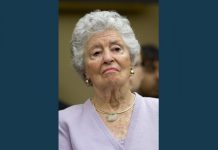