Sept. 29 (UPI) — Officials in Maryland announced they have reached a $20 million settlement with the family of a man who was killed by a police officer in January.

Prince George’s County Executive Angela Alsobrooks announced the agreement, which is one of the largest made in connection to a police-involved death, during a press conference Monday that came months after Cpl. Michael Owen, of the Prince George’s County Police Department, fatally shot William Green after he was arrested on Jan. 27.

Authorities said Green was sitting in the front seat of a police cruiser with his hands cuffed behind his back when Owen fired seven shots from within the vehicle, striking the 43-year-old six times.

The county said it was initially claimed that Green had gone for a weapon in the car when Owen opened fire, but use-of-force specialists within the department were unable to verify the claim, and Owen was arrested within 24 hours of the shooting and charged with murder.

Green had been apprehended following a series of car collisions, officials said.

Alsobrooks, who negotiated the settlement with the Green family attorney, William H. Murphy, told Green’s mother and his two children at the press conference that she is aware that the agreement won’t bring back their loved one and that she was deeply sorry for their loss.

“Now be clear, there is no price that you can put on the life of a son, a father, an uncle, a brother, there is no appropriate price tag to accompany a loss like that one,” Alsobrooks said during the conference. “But we believe the actions taken that night against Mr. Green, and ultimately his family, warrant this settlement.”

The announcement of the settlement occurred nearly two weeks after the city of Louisville said it had reached a $12 million settlement with the family of Breonna Taylor, who was killed during a police raid last spring.

Murphy thanked Alsobrooks during the press conference for “having the courage to do the right thing.”

Alsobrooks told reporters that the money to cover the settlement will come from the county’s budget, stating that “this is not the way we want to spend taxpayer dollars, which is why we’re doing everything we can to make sure we’re never here again.”

Along with the monetary settlement, Alsobrooks will issue a letter to the family expressing regret for the incident as well as allow Green’s family to address the Police Reform Work Group, her office said in a statement. 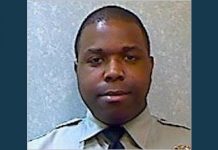