Prosecutors said if the five adults were to be released from custody “there is a substantial likelihood defendants may commit new crimes due to their planning and preparation for future school shootings,” CNN reported.

The allegation was made by a foster parent for one of the 11 children and no further details about the alleged training were included.

Siraj Wahhaj, one of the suspects who also was wanted for the abduction of his 4-year-old son, Abdul-Ghani Wahhaj, appeared in court Wednesday and didn’t enter a plea on the child abuse charges related to holding the children at the compound, New Mexico’s KOB4 reported.

Jany Leveille, one of the three women found at the compound, also didn’t enter a plea.

The other three suspects, Lucas Morton, Hujrah Wahhaj and Subhannah Wahhaj, each pleaded not guilty to child abuse charges.

Officials discovered the remains of a child at the makeshift compound on Tuesday, but Hogrefe did not confirm the identity of the body citing a pending autopsy.

Authorities stormed the compound on Friday in search of Abdul-Ghani, but instead found the 11 other emaciated children living in the filthy compound with scarce amounts of food and water. 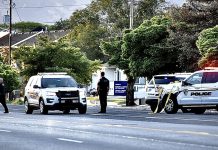