The new cases bring India’s total cases to date to more than 1.69 million.

Within a single day, 764 people also died of the virus, bringing the total death toll to 36,511, according to Union Health Ministry data updated at 8 a.m., the Press Trust of India reported.

Meanwhile, the number of patients recovered from the virus in India increased to more than 1 million.

Saturday was the third day in a row that COVID-19 cases increased by more than 50,000.

Ten people also died this week after drinking alcohol-based sanitizer, district police chief Siddharth Kaushal said. The official said the victims drank the sanitizer after liquor shops were closed in the village of Kurichedu in the Indian state of Andhra Pradesh.

The liquor stores were closed because of a COVID-19 lockdown after a surge in cases.

It was the third straight day the country reported its highest daily infections, ministry data shows.

Nearly one-third of the increase was in the capital Tokyo, which reported its highest daily increase with 463 new cases Friday.

The total number of cases in Japan since the start of the pandemic now stands at 37,746 cases with 1,008 deaths, according to the Johns Hopkins University global tracker.

Mexico also reported a new daily record of 8,458 new cases Friday, bringing the total tally to 424,637 cases, according to the health ministry.

This means that Mexico has now surpassed the Britain to become the country with the third-highest number of deaths globally, Johns Hopkins University data shows.

Still, on Friday British Prime Minister Boris Johnson put a hold on reopening plans and announced extended mask-wearing rules due to a surge in new cases.

In Berlin, the state’s COVID-19 lockdown measures prompted a protest of 17,000 people through the city center.

In South Korea, authorities arrested religious sect leader Lee Man-hee, 88, head of the Shincheonji Church of Jesus after more than 5,000 members became infected. COVID-19 cases within the sect alone make up 36% of all cases in the country. Authorities arrested him based on accusations that he hid information about the group’s gatherings from contact tracers.

South Korea has reported 14,336 cases and 301 deaths, according to Johns Hopkins.

The United States currently is the epicenter of the coronavirus pandemic, with more than 4.5 million cases and over 150,000 deaths, according to the global tracker. Brazil has the second-highest number of cases at more than 2.6 million and the second-highest death toll at over 92,000.

India has the third-highest number of cases worldwide, according to the global tracker. 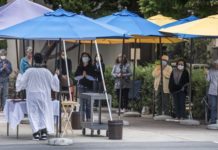