Jan. 31 (UPI) — The United States is nearing 900,000 deaths from COVID as fatalities continue to rise despite falling case numbers.

Since the start of the pandemic, the United States has reported a total of 74,257,916 COVID-19 cases along with 883,993 deaths related to the virus, both the highest national totals in the world, according to data gathered by Johns Hopkins.

With 900,000 deaths seemingly around the corner, Andrew Noymer, a public health professor at the University of California, Irvine, told USA Today that the grim milestone of 1 million deaths related to the virus appears inevitable.

“That will cause a lot of soul searching,” Noymer said. “There will be a lot of discussion about what we could have done differently, how many of the deaths were preventable.”

The CDC has also reported that the seven-day daily average for hospitalization admissions from Jan. 19-Jan. 25 was 19,315, down 8.8% from the previous seven-day average.

States on the East Coast, which were among the first to see spikes in cases brought on by the highly infectious Omicron variant have begun to see broad declines in case rates, with New Jersey reporting a seven-day average of 7,016 new cases, a 14-day decline of 70%, according to tracking by The New York Times.

New Jersey Gov. Phil Murphy told NBC News’ “Meet the Press“ that he was thankful to see cases go down and that the state must act preemptively to ensure testing and other resources are available for potential future surges, but he said managing the virus must become a part of daily life.

“We’re not going to manage this to zero. We have to learn how to live with this,” he said. “Please God, there’s not another significant wave. Every time you think you’ve got this thing figured out, it humbles you.”

Other states such as Colorado, Florida, Illinois and Louisiana have begun to see improvement with case averages dropping more than 40% over 14 days, while Montana is seeing record numbers as its seven-day new daily case average has risen 79% in the past 14 days. Kentucky, Idaho and Washington have also seen their daily averages rise 40%-55% in the past two weeks. 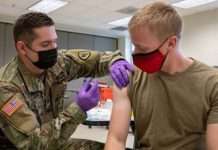