The crane fell across a building on Mercer Street and Fairview Avenue, smashing six cars, according to the Seattle Fire Department.

Killed were two men working on the crane and two inside vehicles, a man and a woman, crushed by the crane. The King County Medical Examiner’s Office said names of people would be released Monday, KING-TV reported.

At about 3:30 p.m. PDT, paramedics arrived to take three people, a 25-year-old woman, her 4-month child and a 27-year-old, to Harborview Medical Center with non-life-threatening injuries.

The crane, which was working on a four-building complex, fell from the roof of a South Lake Union building, The Seattle Times reported. The project will house a new Google Seattle campus and about 150 new apartments.

Construction, which began in 2017, is scheduled to be finished this year.

Witnesses said they saw workers earlier in the day dismantling the crane.

“It was terrifying,” Esther Nelson, a biotech research assistant working in a building nearby told The Seattle Times. “I looked up. The wind was blowing really strong.”

She estimated the crane was eight or nine stories high and broke in half.

“Half of it was flying down sideways on the building,” she said. “The other half fell down on the street, crossing both lanes of traffic.”

The Washington State Department of Labor and Industries is investigating the crane’s failure. 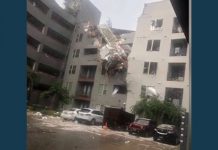 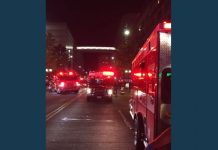