Nov. 24 (UPI) — A report of shots fired at a London Underground train station led to panic and a stampede on Friday, but responding police said they found no evidence of gunfire.

London’s Metropolitan Police said they did not find evidence of shots fired, and the only injury, to a woman caught up in the subsequent panic, was minor.

“Given the nature of the information received, the Met responded in line with our existing operation as if the incident was terrorism, including the deployment of armed officers. Officers, working with colleagues from British Transport Police, carried out an urgent search of the area. No causalities, evidence of any shots fired or any suspects were located by police.” a police statement later said.

London’s fire department sent three fire trucks and 15 firefighters to the scene, and Transport for London, the subway information service, said an unidentified “customer incident” was under investigation. 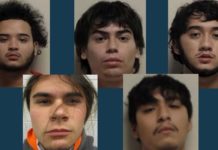