Jan. 3 (UPI) — Defense Secretary Lloyd Austin announced Sunday night that he has tested positive for COVID-19 and will quarantine at home for the next five days.

Austin said in a statement that he tested positive Sunday morning while on leave and had requested the test after exhibiting symptoms.

“My symptoms are mild, and I am following my physician’s directions,” he said. “I have informed my leadership team of my positive test result, as well as the president. My staff has begun contact tracing and testing of all those with whom I have come into contact over the last week.”

The defense secretary said his last meeting with President Joe Biden was on Tuesday when he had tested negative for the virus and more than a week before he began exhibiting symptoms, while his last visit to the Pentagon was on Thursday when he briefly met with a few of his staff members while being masked and practicing social distancing.

“As my doctor made clear to me, my fully vaccinated status — and the booster I received in early October — have rendered the infection much more mild than it would otherwise have been,” he said. “And I am grateful for that.”

Austin plans to attend key meetings and discussions scheduled for the week virtually, with Deputy Secretary Kathleen Hicks to represent him in other matters, the Defense Department said.

As of Dec. 22, more than 261,500 service members have tested positive for the virus, resulting in 2,320 hospitalizations and 82 deaths, according to data from the Pentagon.

“Stemming the spread of this virus, safeguarding our workforce and ensuring my own speedy and safe recovery remain my priorities,” Austin said. 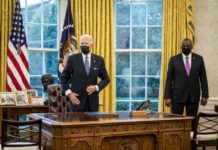 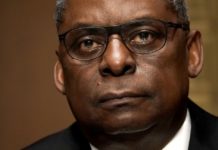