RAPID CITY, S.D., July 9 (UPI) — A Delta Airlines flight mistakenly landed at an Air Force base instead of the intended airport in South Dakota, authorities said.

Flight 2845 left Minneapolis and landed at Ellsworth Air Force Base, which is located about 10 miles north of the intended destination, Rapid City Regional Airport in Rapid City, S.D.

“The Radar Control Approach gave instructions to the Delta flight in this instance and pointed out BOTH runways to the flight crew to alleviate any issues with identification of the correct airport,” said Col. Gentry Boswell, 28th Bomb Wing commander at Ellsworth. “The crew replied they had the landing runway at Rapid City Regional Airport in sight.”

The Federal Aviation Administration and the National Transportation Safety Board are investigating the incident. Delta placed the flight crew on leave.

“Delta will fully cooperate with that investigation,” the airline said in a statement. 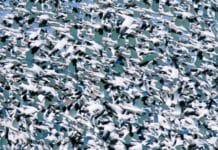