Feb. 20 (UPI) — Democratic presidential candidates laid out their plans for the future of healthcare and climate action in America during a debate in Nevada on Wednesday.

Sanders faced criticism from the Nevada culinary union that his Medicare for All plan would end their healthcare coverage.

During the debate, Sanders pledged that he would never sign a bill that would reduce health care plans for union workers and will “only expand” healthcare for union members and other American workers.

Warren took aim at the healthcare plans put forward by Sanders, Buttigieg and Klobuchar, calling for an incremental approach to secure universal healthcare.

“Healthcare is a crisis in this country,” she said. “We need as much help for as many people as quickly as possible and to bring in as many supporters as we can. If we don’t get it all the first time, take the win and come back into the fight to ask for more.”

Klobuchar called for a health plan that would allow a public healthcare option to compete with private plans, saying that Medicare for All does not have enough support in Congress to be implemented.

“Since we’re in Vegas, when it comes to your plan, Elizabeth and Bernie, for Medicare for All you don’t put your money on a number that’s not even on the wheel,” she said.

Buttigieg said it was important to put forth a candidate against President Donald Trump who is “actually positioned to win” in order to bring about policies to combat climate change as quickly as possible.

“Let’s be real about the deadline. It’s not 2040. It’s not 2030. It’s 2020,” he said. “Because if we don’t elect a president who actually believes in climate science now, we will never meet any of the other scientific or policy deadlines that we need.”

Biden said he would place a focus on transmitting wind and solar energy across the electrical grid, invest in highway charging stations for electric vehicles and high-speed rails to combat climate change. He also pledged to roll back some of the Trump administration’s efforts against regulations by the Environmental Protection Agency.

“I would immediately reinstate all of what Trump has eliminated in terms of the EPA,” he said. “I would once again make sure that we get the mileage standards back up which would have saved over 12 billion barrels of oil had he not walked away from it.”

Warren called for an end to offshore drilling as well as all new drilling and mining on public land but said she would be open to exceptions providing sustainable practices to harvest certain minerals rather than plans that benefit large corporations.

“We cannot continue to let public lands be used by those who don’t care about our environment and are not making it better,” she said.

Bloomberg said that the United States must work together with countries such as China, India to end the climate crisis. 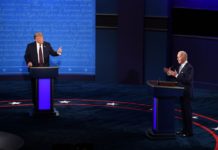 Debate commission: Candidates’ mics will be muted during portions of final debate 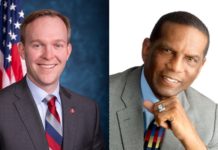 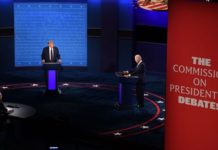 Next presidential debate to be virtual; Trump refuses to participate