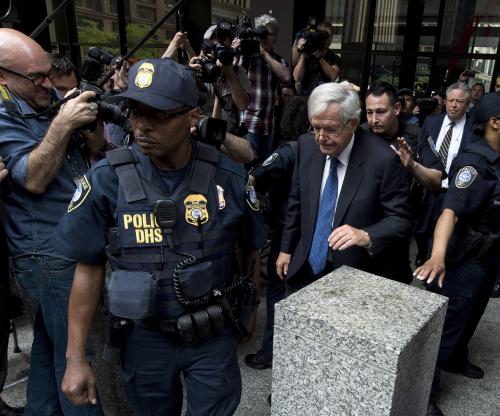 The move reflects Hastert’s shifting priorities as he battles federal charges for allegedly lying to the FBI and dodging federal banking laws.

In liquidating the “Keep Our Mission” leadership PAC, Hastert was able to make a $10,000 donation to his newly formed legal defense fund, the J. Dennis Hastert Defense Trust — one his lawyer, Tom Green, told Politico he hopes will become “a large one.”

The feds allege that, over a period of several months, Hastert withdrew nearly $1.7 million in cash from his bank accounts. The funds were apparently hush money, part of a $3.5 million agreement, given to a former acquaintance to keep quiet over past transgressions.

Reports have surfaced suggesting Hastert was paying for silence over a series of sexual assault accusations. The FBI is aware of three potential victims, former Illinois high school students abused by Hastert.

The statute of limitations is up on these alleged crimes, and the FBI is not currently pursing charges related to the sexual abuse accusations. Instead, the feds are focused on the politician’s financial missteps.

After being warned that withdrawals over $10,000 would be reported to federal banking authorities, Hastert began taking out a series of slightly smaller amounts — a maneuver known as a structuring, which is illegal even if the money is being used for legal activities.

When questioned about his behavior, Hastert told the FBI that he was keeping the money at his home because he didn’t trust the banks.

In June, Hastert pleaded not guilty to charges that he skirted banking rules and lied to federal authorities. If convicted, he could face up to ten years in prison.