BOULDER, Colorado, March 22, 2021 (Gephardt Daily) — A Boulder, Colorado police officer is among multiple people killed in a supermarket shooting Monday afternoon, according to a statement by Boulder Police.

The shooting took place at the King Soopers grocery store at 3600 Table Mesa Drive about 2:30 p.m., according to witnesses.

The exact number of those killed has yet to be released.

Boulder Police Commander Kerry Yamaguchi confirmed a person of interest in is custody and is being treated for unspecified injuries at a local hospital.

News cameras captured images of a shirtless man wearing only shorts being escorted from the store by Boulder police officers. His right leg appeared bloodied.

According to CNN, a senior law enforcement source says the gun used was an AR-15 style weapon.

Video, which was streamed live over social media, showed at least three people lying motionless, one in the parking lot, one on a sidewalk outside the store, and another a few feet inside the grocery’s entrance.

Local law enforcement agencies have been joined by investigators from the FBI, the Bureau of Alcohol, Tobacco, Firearms and Explosives.

President Biden has been briefed on the shooting as has Colorado Gov. Jared Polls.

“Like my fellow Coloradans, I am closely watching unfolding events at King Soopers in Boulder,” Polls wrote in an afternoon tweet. “My prayers are with our fellow Coloradans in this time of sadness and grief as we learn more about the extent of the tragedy.

Gephardt Daily will update the developing story as more information has become available. 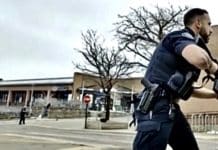 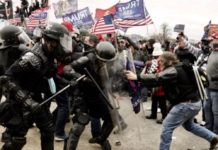