April 5 (UPI) — The man in charge of the U.S. Department of Homeland Security said Wednesday it’s “unlikely” that President Donald Trump‘s government will build a wall along the entirety of the United States’ border with Mexico — a central pledge of the new president’s immigration policy.

Days after taking office in January, Trump signed an executive order to get the ball rolling on his long-promised border wall and ordered the Homeland Security Department to ramp up enforcement of federal immigration laws.

Wednesday, though, the president’s top point man on the plan said erecting a wall along the 2,000 miles of land the United States shares with Mexico would be impractical and unnecessary.

“It is unlikely that we will build a wall from sea to shining sea,” Kelly told lawmakers on the Homeland Security Committee.

“The sooner we stop this [rhetoric of], ‘We are going to build a wall from sea to shining sea,’ and, ‘The Mexicans are going to pay for it’ — it’s embarrassing,” Sen. Claire McCaskill, D-Mo., a member of the panel, told Kelly. “[Congress] is not going to sign a blank check for a wall that we know is never going to be built.”

The first bids for concepts of a border wall were due Tuesday. The first section will reportedly be built on federal land near San Diego, where there is already a fence barrier.

A full and complete border wall has been estimated to carry a price tag of several billion dollars. In his budget, Trump asked for $1.4 billion to begin development of the controversial project — which the White House says is entirely rooted in national security concerns.

Kelly said two-thirds of a Homeland Security funding request, or about $1 billion, will be dedicated to “initial wall investment” in preparing the barrier. Funding will also go to technology, infrastructure and roads at the border. Another $2.6 billion for planning and building a wall has been requested in the 2018 budget, he said.

In Congress, the proposal faces universal opposition from Democrats and skepticism from some Republicans. In his remarks, Kelly said wall sections will likely be built on strategically selected parts of the border where they would be most effective.

In his testimony, Kelly also credited Trump’s executive orders for what he said was a decline in undocumented immigrants detained at the Mexican border last month — less than 17,000 apprehensions in March, he said, which is the lowest since 2000.

“March marks the fifth-straight month of decline and is estimated to be approximately 71 percent lower than the December 2016 total [of] 58,478 … U.S. Border Patrol apprehensions for the last two months have decreased dramatically,” he said. “Typically, this is the time of year that the agency observes marked increases.”

Kelly attributed the decline to “continued and successful efforts of our men and women at the border, as well as the support of our leadership in the White House.”

Since taking office, Trump has also expanded the authority of the department to identify undocumented aliens for possible deportation as part of his sweeping immigration agenda. Another element, his so-called “travel ban” to temporarily bar refugees and immigrants from entering the United States, is currently being blocked in federal courts. 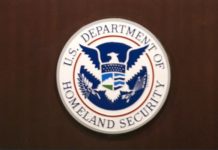