Jan. 6 (UPI) — The Department of Homeland Security on Friday issued new guidelines about to what extent border agents may search the electronic devices of people entering and exiting the United States.

The new directive replaces one issued by the Obama administration in 2009 giving Customs and Border Protection power to search travelers at the border without a warrant.

Agents can still check electronic devices, but can only access items stored directly on the device, not information stored remotely or in the cloud. When travelers hand over their devices, agents will instruct them to take their devices offline or disable cellular connectivity.

Agents are only allowed to access offline information if there is “reasonable suspicion” of law breaking or national security concerns.

“Many factors may create reasonable suspicion or constitute a national security concern; examples include the existence of a relevant national-security related lookout in combination with other articulable factors as appropriate, or the presence of an individual on a government-operated and government-vetted terrorist watchlist,” the policy says.

With or without suspicion, agents are still allowed to view photographs, browser search histories and messages. The rules apply to cellphones, tablets, computers, cameras and other digital devices. They can also request passcodes to access devices, and if a traveler refuses to unlock a device or it is otherwise inaccessible, agents can confiscate them.

“CBP is committed to preserving the civil rights and civil liberties of those we encounter,” John Wagner, deputy executive assistant commissioner of field operations, said in a statement. “CBP’s authority for the border search of electronic devices is and will continue to be exercised judiciously, responsibly, and consistent with the public trust.”

Also Friday, Customs and Border Patrol released statistics on the number of devices agents screened during the 2017 fiscal year. The year ending in September 2017, agents searched the devices of 30,200 travelers, up from 19,051 the year before. During the 2015 fiscal year, they searched 8,053.

The latest number accounts for less than 1 percent of travelers, and of those screened, fewer than 20 percent were U.S. citizens. The increase has some privacy law experts concerned.

“The idea that they can be searched just by entering or leaving the country we are citizens of — it goes against the very thing the 4th Amendment was designed to protect against, which is arbitrary dragnet surveillance,” Ryan Calo, law professor at the University of Washington in Seattle, told the Los Angeles Times. 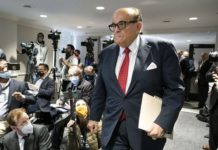