Jan. 18 (UPI) — A distress signal emanating from a pair of isolated, low-lying islands near Tonga has been detected in the wake of this weekend’s undersea volcano eruption, United Nations officials said Monday.

The UN Office for the Coordination of Humanitarian Affairs said the distress beacon is coming from the Ha’apai Group of islands, situated 45 miles northeast of the main Tongan island of Tongatapu, where concerns were mounting about the welfare of the small islands of Mango and Fonoi.

The two islands lie just a few miles to the northeast of Saturday’s eruption site in the South Pacific.

Communications in the South Pacific remained disrupted Monday, two days after the eruption.

Two people had been reported missing in Tonga. Family members of one of the missing persons, British national Angela Glover, said her body was recovered Monday after she was swept away by the tsunami wave, Sky News reported.

Two others were reported killed in Peru, while two people were injured during evacuations in Japan, local authorities said.

In investigating the distress beacon from the islands of Mango and Fonoi, OCHA said Australia carried out a surveillance flight Monday and reported substantial property damage on the beaches.

The Tongan Maritime Force has also deployed to the Ha’apai Group of islands. 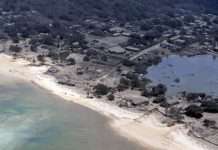