April 23 (UPI) — The Department of Defense has adopted and expanded a tool developed by the Army Corps of Engineers and will use it project the effects of climate change on almost 1,400 locations, the Pentagon announced Thursday.

The Army Corps of Engineers’ Climate Assessment Tool, also known as DCAT, was released department-wide in September by the Office of the Under Secretary of Defense for Acquisition and Sustainment, according to a Pentagon press release.

During an Earth Day event at the White House Climate Leaders Summit, Pentagon officials announced that the DCAT will now be used to complete climate exposure assessments on all major U.S. military installations and at major overseas installations.

Marissa McInnis, climate change program director and co-lead for the Climate Action Team, said the tool enables personnel at all levels of the department to understand each location’s exposure to climate-related hazards using a combination of historical data and future climate projections.

“From coast to coast and across the world, the climate crisis has caused substantial damage and put people in danger, making it more difficult for us to carry out our mission of defending the United States and our allies,” he said.

He noted a few recent examples of how extreme weather caused by climate change has affected the DoD, including billions of dollars in damage at Florida’s Tyndall Air Force Base caused by Hurricane Michael; severe flooding at Nebraska’s Offutt Air Force Base in 2019; wildfires in California forcing evacuations from military installations; and Typhoon Wutip, a February 2019 storm that forced the DoD to pause exercise with allies near Guam, though typhoons typically hit the region between June and December.

He also said climate change is a destabilizing force for the world, creating increased competition for resources and threatening millions with drought, hunger and displacement.

Climate change is also driving mass migration — which leaves people vulnerable to exploitation and radicalization, all of which undermine stability, Austin said.

The DoD is committed to increasing the energy efficiency of its platforms and installations, Austin said.

And President Joe Biden has asked the United States’ 18 intelligence agencies to produce National Intelligence Estimate on the security implications of climate change.

He also pointed to the Climate Change and Sustainability Strategic Approach issued last month by Britain’s defense ministry as a model for how militaries can adapt to climate change while advancing military capabilities and resilience.

“The benefits of action extend well beyond the climate, and include opportunities to improve our own operations. For example, when we operate more sustainably, we become more logistically agile and ready to respond to crises,” Austin said. 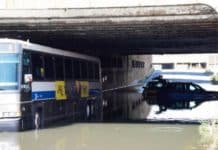